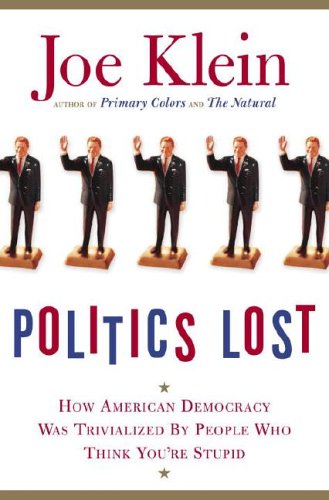 Politics Lost: How American Democracy Was Trivialized by People Who Think You're Stupid

The people castigated in this lively but self-contradictory jeremiad make up the "pollster-consultant industrial complex" of political handlers responsible for today's bland, prefabricated candidates, carefully stage-managed campaigns and vacuous, focus-grouped policy proposals. Political reporter and pundit Klein ( ) traces the political consultants' influence through pungent insider accounts of presidential campaigns from 1968 to the present, throwing in plenty of his own armchair quarterbacking of triumphs and fiascoes. Throughout, he deplores the deadening of American political culture and celebrates the few politicians, like Ronald Reagan and John McCain, who occasionally slip the consultant's leash, blurt out an unfashionable opinion, take a principled stand or otherwise demonstrate their unvarnished humanity. Unfortunately, Klein's politics of personal authenticity—he longs for a candidate "who gets angry, within reason; gets weepy, within reason... but only if these emotions are rare and real"—seems indistinguishable from the image-driven, style-over-substance politics he decries; he just wishes the imagery and style were more colorful and compelling. Moreover, Klein's insistence that the electorate cares much more about the sincerity or "phoniness" of a politician's character than about policy issues puts him squarely in the camp of people who think voters are stupid.