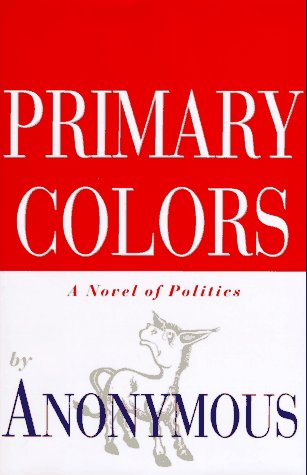 Primary Colors: A Novel of Politics

The circumstances behind this crackling, highly perceptive study of a presidential campaign that remarkably resembles Bill Clinton's are bizarre. We are assured that not even its publisher, Harold Evans, who signed the book, or its editor knows the identity of the author. A third party, independent of both the publisher and the author's agent, verified his (or her) credentials and oversaw the contract signing. All this has naturally led to the assumption that the author may be someone highly placed in Washington, possibly even within the Clinton Administration; the intimate knowledge of Washington folkways the narrative exhibits seems to bear that out. On the other hand, the literary sophistication on display-the shaping of the story, the characterizations, the atmosphere, the dialogue-is so considerable it seems a professional writer must be at work. But while the mystery may help galvanize sales, it does not affect the quality of the book, which stands as a definitive political novel for these uneasy times-a novel that's knowing about the easy abuse of sincerity, the overblown role of the media (all reporters are ``scorps,'' short for scorpions), the readiness to confuse means with ends. Henry Burton, the narrator, is a bright, youngish black man who rises quickly to a key position on the presidential primary campaign staff of Jack Stanton, governor of a small Southern state. Stanton is a brilliant portrait of a born politician, a man at once deeply calculating and genuinely spontaneous in his human reactions; his wife, Susan, a smart lawyer, despises his louche sexual adventuring but is driven by her own demons. Around them revolves a superbly observed staff, a mixture of deep cynicism, muddled idealism and, in the person of Libby, a ghost from Stanton's past who is at once explosively funny and tragic, a compulsive seeker of the truth. Stanton's fortunes fluctuate wildly in the campaign as he slogs through New Hampshire, endures a drubbing in New York (where a governor not unlike Mario Cuomo decided not to run) and seems to cause a heart attack in a buttoned-down rival in Florida. This inspires the entry of a mystery candidate with a magic touch, who turns out, in one of the novel's few overplotted passages, to have his own complex problems; the resolution, however, strikes just the right uneasily ambiguous note. Throughout the book, the attention to physical and emotional detail in the draining political process, the sparkling intelligence and-through the use of Henry as hero-the unusual empathy with which a range of African Americans are portrayed suggest a very considerable new novelist. (Feb.)
close
Details