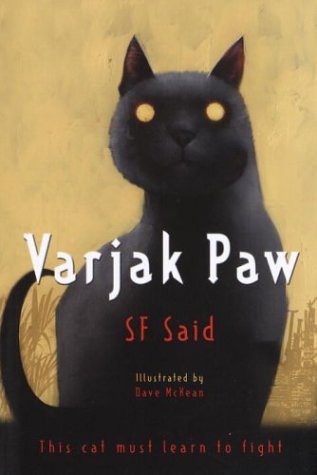 In the tradition of dystopian animal stories like , British author Said's dark allegorical tale introduces a pampered indoor cat who ventures "Outside" for the first time. Varjak Paw is a purebred Mesopotamian Blue whose eyes are not green like the rest of his family's; yet readers may pick up on clues from Varjak's grandfather, the Elder Paw, that the kitten may share a trait or two with his esteemed ancestor, Jalal. A series of events leads to the Elder Paw's hastened attempts to instruct Varjak in a discipline called "the Way" (the Elder only knows three of the Seven Skills)—and sends him on a mission to save the feline family. Outside, Varjak learns from urban street cats about a dreadful fate called "Vanishing," involving the disappearance of great numbers of cats. Meanwhile, in his dreams, Varjak visits his ancestral land along the Tigris River, where Jalal instructs him in the Seven Skills of "the Way," akin to the tenets of the spiritual practice of the martial arts (e.g., the first skill is "Open Mind," the second, "Awareness," etc.). The fate of the "Vanished cats," "not quite alive, not quite dead," also underscores the importance of living consciously. The author follows mythic archetypes in this densely plotted cat story, illustrated in chilling, sinuous pen-and-ink images by McKean. The exposition is suspenseful and the conclusion taut. As Said evokes the dangerous life of a cat fending for itself, he also weaves in elements of humor and legendary bravery, proving that growth stems from adversity. Ages 8-12.