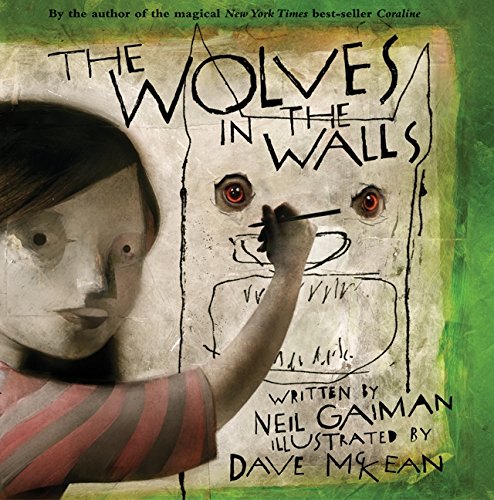 THE WOLVES IN THE WALLS

"If the wolves come out of the walls, it's all over," is the oft-repeated prediction in Gaiman's latest, a picture book that cleverly balances humor and spookiness in a slightly off-kilter setting. As he did in his novel , the author again introduces an inquisitive girl who lives in a creepy old house with her distracted family. When Lucy hears "squeaking, creeping, crumpling noises" from inside the house's walls, she's convinced it must be wolves. Lucy's parents and younger brother, who don't share Lucy's sharply attuned ear, but have heard bad things about wolves in people's walls, insist any noise must be emanating from something more logical, like rats or mice. But when Lucy's hunch comes true, the family flees—until brave, determined Lucy hatches a plan to turn the tables. Gaiman's text rings with energetic confidence and an inviting tone, even as he leads readers into a bizarre and potentially spine-tingling scenario. McKean (who previously collaborated with Gaiman on the Sandman comics and ) expertly matches the tale's funny-scary mood. Lucy shines as a heroine, standing tall among somewhat tuned-out supporting characters that are an inventive mixture of ordinary and odd. Against shadow-filled backdrops that blend paint, digital manipulation and photography, his stylized human figures look right at home. His pen-and-inks of the wolves, often with a judicious dash of color, suggest that they inhabit a world apart—or perhaps unreal? Author and artist credit their audience with the intelligence to puzzle out the question for themselves. All ages.