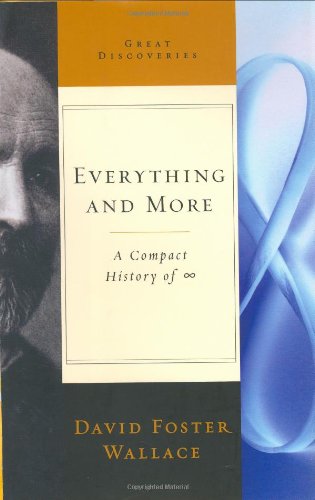 EVERYTHING AND MORE: A Compact History of ∞

The subject of infinity would probably strike most readers familiar with Wallace as perfectly suited to his recursive style, and this book is as weird and wonderful as you'd expect. There are footnotes galore, frequently prefaced by the acronym IYI ("If You're Interested"), which can signal either pure digression or the first hint of an idea more fully developed in later chapters. Among other textual idiosyncrasies is the constant use of the lemniscate ∞ instead of the word "infinity," emphasizing that this is "not just an incredibly, unbelievably enormous number" but an abstraction beyond what we normally conceive of when we contemplate numbers. Abstraction is one of Wallace's main themes, particularly how the mathematics of infinity goes squarely against our instinct to avoid abstract thought. The ancient Greeks couldn't handle infinity, he points out, because they loathed abstraction. Later mathematicians fared better, and though the emphasis is on Georg Cantor, all the milestones are treated in turn. Wallace appreciates that infinity can be a "skullclutcher," and though the book isn't exactly easy going, he guides readers through the math gently, including emergency glossaries when necessary. He has an obvious enthusiasm for the subject, inspired by a high school teacher whose presence is felt at irregular intervals. Had he not pursued a career in literary fiction, it's not difficult to imagine Wallace as a historian of science, producing quirky and challenging volumes such as this every few years.