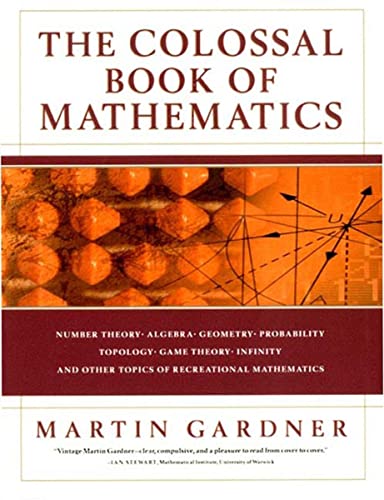 THE COLOSSAL BOOK OF MATHEMATICS: Classic Puzzles, Paradoxes, and Problems

This weighty collection, containing 50 of what the annotator and popular science journalist considers his best "Mathematical Games" columns, is sure to please the relatively small but intensely loyal coterie of Gardner fans. Arranged in 12 broad categories (arithmetic and algebra, plane geometry, topology, infinity, etc.), these pieces cover subjects that will delight recreational math buffs, such as Penrose tiles, hypercubes, Klein bottles and fractal music. In addition to an up-to-date bibliography, each section includes a new, sometimes lengthy addendum, which should be the main hook for those who already own the 15 volumes of Gardner's complete columns. While books on math for general audiences by authors such as Amir Aczel have been in vogue of late, they've tended to focus on personalities and to avoid equations. Since this collection is filled with problems and expressions (illustrated with 320 line drawings) that require solving with pencil and paper, its appeal should be mainly limited to puzzle nuts, but Gardner's elegant style could draw in new aficionados. An enemy of charlatanry and pretension, who appreciates the beauty and complexity of language as well as numbers (and still actively writing at age 86), Gardner remains a model of clear prose, understated wit and intellectual honesty.