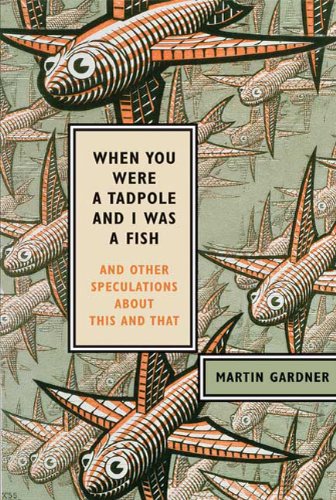 When You Were a Tadpole and I Was a Fish: And Other Speculations About This and That

With more than 70 books to his credit, Gardner remains thoroughly enjoyable to read. This latest is a collection of 24 articles, book reviews and other pieces on subjects like science, bogus science, mathematics, logic, literature, religion and politics. The range demonstrates that Gardner should be well-known for more than his remarkable “Mathematical Games” column published for 25 years in Gardner is a debunker who begs folks to think critically and carefully, usually doing so himself with wit and wisdom. He takes on Ann Coulter for her pronouncements on intelligent design and those who claim the sinking of the was foretold by numerous people. He is most personal in the book's longest piece, “Why I Am Not an Atheist,” in which he explores the nature of belief. His essays on , Santa Claus and the book's eponymous poem on evolution by Langdon Smith are of a different genre than the rest, but no less interesting. Least compelling in such a general collection are the somewhat pedantic mathematical explorations. The collection represents Gardner at his best.