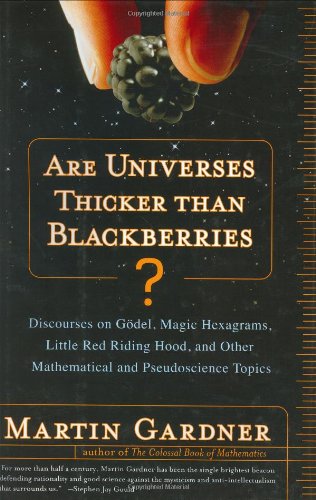 ARE UNIVERSES THICKER THAN BLACKBERRIES? Discourses on Gödel, Magic Hexagrams, Little Red Riding Hood, and Other Mathematical and Pseudoscience Topics

Gardner is a revered figure among science buffs for his long tenure at , and his many other publications. This latest collection brings together recent columns and introductions to new editions of neglected gems like Chesterton's . The first two sections cover familiar Gardner topics: science and games. In the third section, Gardner (who bills himself a philosophical theist) muses on religion and religious figures and ties in with the last section on Freudians and psychics. This is not one of Gardner's stronger collections. Too often he seems petulant in an Andy Rooney sort of way, but without Rooney's underlying sense of fairness. He brands Gary Wills a near-heretic for Wills's criticisms of the Catholic Church; Gardner concludes his critique with a six-point catechism demanding to know what Wills himself believes. Wills's has been in print for almost a year, ample time for Gardner to have added an afterword, as he has for a few of his other essays. Gardner's distaste for Freudian and feminist interpretations of the Little Red Riding Hood story seems to stem mainly from their sexual content. His own interpretation is a simplistic, albeit plausible, tale of good and evil. Gardner's best essays cover old stomping grounds: literature like the Oz stories or Edgar Wallace's , and the tricks used by psychics and various New Age tricksters. Still, die-hard Gardner fans may find worthwhile reading here. 30 illus.