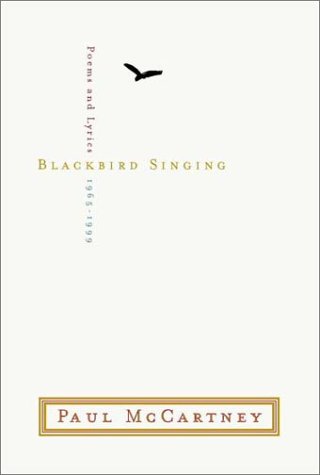 Sir Paul McCartney—painter, composer and songwriter (even the Queen taps her feet to "Penny Lane")—has been steadily writing poetry along with the lyrics memorized by much of the world. British political poet and satirist Adrian Mitchell (who is well-known over there, and best represented by over here) worked as a pop critic in 1963 and published the first national interview with the Beatles, remaining friends with McCartney since. In consultation with Sir Paul, he has selected from among McCartney's works. There are the grand and expected songs, such as "Hey Jude," "Yesterday" and "Eleanor Rigby"; ditties like "Ob-la-di, Ob-la-da" and surreal oddities like "She Came in Through the Bathroom Window"; elegies for McCartney's wife, Linda Eastman McCartney, and for friend Ivan Vaughan; and a variety of verse, such as "To Find the Joy": "Seagulls spiral whirl/ Against the sullen oak/ No scientific thought informs/ Their madcap tribal swirl." As Mitchell writes: "Clean out your head. Wash out the name and the fame. Read these clear words and listen to them—decide for yourself."