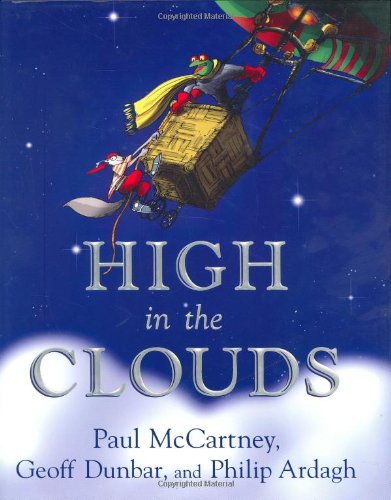 High in the Clouds

Marking McCartney's children's book debut, this playfully meandering tale in which good triumphs over evil was inspired by (2004), an animated film on which the singer/songwriter and Dunbar, the animator, collaborated. McCartney here teams up with Ardagh (the Eddie Dickens trilogy) to create a fanciful, conversational narrative starring Wirral the squirrel, whose mother is a storyteller. Wirral's favorites of his mother's stories are set in Animalia, a tropical island where creatures live "without a care in the world." Bulldozers soon destroy idyllic Woodland, and Wirral's mother is crushed by a felled tree. Her final words to Wirral are to seek Animalia, sending him on a classic quest. In grimy Megatropolis, Wirral finds Gretsch, the "hairless ape" responsible for the Woodland's demise. When the hero learns of Gretsch's plan to obliterate Animalia, he sails off with his pal Froggo in the amphibian's hot-air balloon to find the island and warn its residents. Some adult asides are thrown in for good measure (citydweller Ratsy introduces himself saying, "You may have heard of my dad, Papa Ratsy?... The photographer?"), and some youngsters may be troubled by a few oversimplifications (are all humans bad, since Gretsch, a human, wishes to destroy nature?) and dangling questions (why does Froggo have a wooden leg? why do the Animalia inhabitants trust Gretsch with the care of their young at book's end?). But many will enjoy the happy ending as well as Dunbar's electric-hued energy-charged cartoon art with its 3-D quality and cast of eccentric animal characters sporting outlandish outfits and exaggerated facial expressions. 500,000 first printing. All ages.