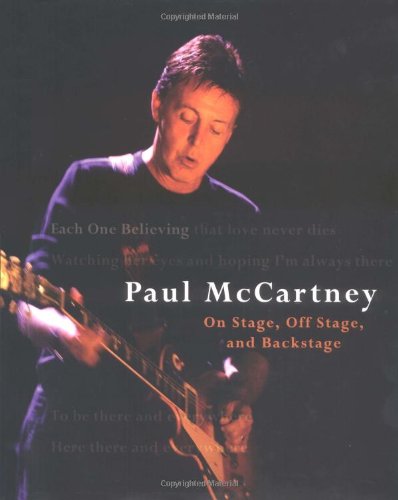 EACH ONE BELIEVING: Paul McCartney On Stage, Off Stage, and Backstage

In 2002–2003, former Beatle McCartney went on a world tour that named "Tour of the Year" during which he performed before two million people. This sumptuous coffee-table–size book offers an intimate if hagiographic record of that tour and is distinguished both by more than 100 vibrant photos (most in full color) by Bill Bernstein, official photographer of the tour, and by extensive commentary from McCartney (as well as by excellent arrangement by Caroline Grimshaw, who, according to the acknowledgments page, "selected, organized and edited material extracted from film and interview transcripts... [and] designed the book"). The book opens with McCartney's rousing appearance at an all-star concert in Manhattan on October 30, 2001, to raise money for 9/11 victims. Then comes the tour, highlighted by several remarkable concerts, most notably one outside the Kremlin attended by President Putin (who told McCartney that, when he was growing up, Beatles music "was like a gulp of freedom") and one in Rome attended by half a million fans. The text consists primarily of interview extracts, snippets of conversation among band members and unsigned scene-setting paragraphs and (often extensive) photo captions; there's much fascinating info about the logistics of putting on a massive tour, from choosing personnel to preparing the right food ("nothing with a face" by order of vegetarian McCartney) and song selection. The primary attraction, though, is McCartney's words, which range from sentimental to playful and reveal a man as happy with his work and life as his many fans will be with this clean-cut, jolly book.