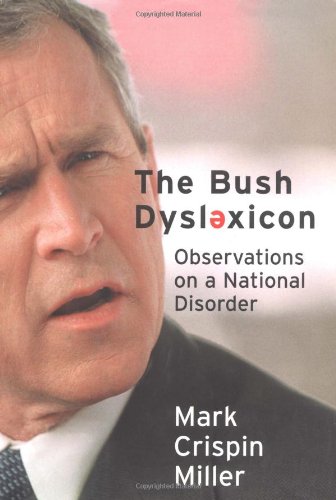 THE BUSH DYSLEXICON: Observations on a National Disorder

Miller, a New York University professor of media studies, has fashioned a devastating compendium of President George W. Bush's grammatical gaffes, syntactical shipwrecks, mind-boggling malapropisms and simply dumb comments. Page after page (after page) of quotations, suggests Miller, reveal that Bush is a man who, while not stupid, is prodigiously illiterate and woefully uneducated. Further, and compounding the problem, Bush could not care less about these shortcomings. How then, Miller asks, and this is his larger concern, did someone—in Miller's opinion—so obviously unqualified to be president convince so many voters that he was? Miller's answer is, in a word, : Bush succeeded on TV not despite his "utter superficiality," but because his superficiality blended seamlessly with the vacuous culture of the tube. It was not simply that Bush's handlers were able to manipulate his image, attempting to construct out of his ignorance an anti-intellectual "good ole boy" persona, but that news professionals in the medium were all too willing to go along with this ploy. They went along because the pundits of TV have become, according to Miller, increasingly right-wing, thus natural Bush allies, but also because they no longer care to talk about substance, preferring instead discussion of "likability" and other attributes of pure image. While Miller is sometimes vague in his arguments, he has produced a sharp-edged polemic questioning the wisdom of how we elect our leaders. As President Bush has said, "It's not the way America is all about."