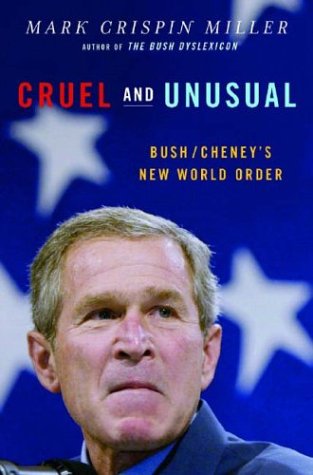 In delivering this blunt jeremiad—Bush is "fascistic," "theocratic," a "crook," etc.—Miller ( argues that the Bush-era press isn't simply biased, it has been lulled into an Orwellian false consciousness. One of the major examples Miller, a professor of media studies at NYU, offers is the case of Scott Ritter, the former U.N. weapons inspector who insisted before the war that Iraq probably had no unconventional weapons and was treated by TV interviewers like Paula Zahn as a near-stooge for Saddam. For Miller, further elements of the current order include electronic voting machines that he says were used to tilt the 2002 congressional elections and a cabal of Christian Reconstructionists that wants to impose theocracy on America. Miller, sometimes overheatedly, links the "extremist propaganda" of the Christian right to Bush assertions and policies, traces it to groups like the highly secretive Council for National Policy, and presents what he sees as a final agenda: "To such apocalyptic types, the prospect of a ruined earth is no big deal, as long as God can be alleged to go for it." While such arguments are familiar, as is the indignant tone, Miller's thoroughness and clarity in tracking down the sources of the policies he decries, and the ways in which they are disseminated, set the book apart. .