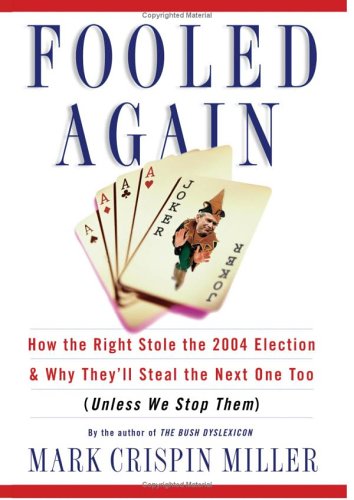 Fooled Again: How the Right Stole the 2004 Election and Why They'll Steal the Next One Too (Unless We Stop Them)

In this belated exposé—and clarion call for electoral reform—Miller ( accuses George W. Bush and his "theocratic militants" of orchestrating electoral fraud to "hijack" the 2004 presidential race. Miller relies on original reporting, secondary sources and unadulterated outrage to make his case, marshaling evidence (much of it circumstantial) of Democratic voter disenfranchisement, mysterious computer snafus and discrepancies between exit poll results and official vote counts. He is especially critical of the press for what he describes as silence in the face of Bush's and Cheney's denials of fraud. Democratic presidential candidate John Kerry is another target of Miller's ire, for ignoring warnings of coordinated Republican plans to cheat and for doing nothing to contest the vote counts, especially in swing states Ohio and Florida. "Election-stealing" in Florida in particular presages a dark future for the entire nation: "a system built specifically to disenfranchise an aroused and even militant majority, and to do so without leaving any traces." Though Miller's sometimes unclear sourcing puts the burden on readers to separate fact from hearsay, he gathers enough well-documented evidence that anyone who cares about fair play should find this book revelatory.