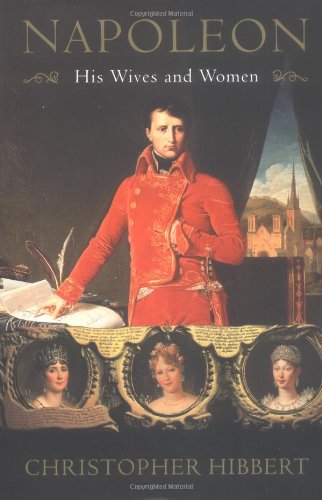 NAPOLEON: His Wives and Women

Hibbert is both eclectic and prolific, and his energies are hardly flagging; in the last few years, he has produced well-regarded biographies of Wellington, Queen Victoria and George III. Hibbert has a talent for visiting old ground with a fresh eye, and as he crosses the Channel, he does not disappoint. The Napoleon who emerges is not the victor, the emperor nor even the hero brought low, but the man as revealed in his relations with the numerous women in his life: his wives, his mistresses, his sisters and his mother. It is, on the whole, not a pretty sight. Napoleon was often crude, rude, insulting and even violent toward women, some of whom unaccountably found him irresistible. Marie Walewska, the teenaged wife of a Polish count offered to Napoleon to avert the destruction of Poland, fainted at their first private encounter and was raped while unconscious. Still, she appears to have fallen in love with him, and bore his child. Poland, however, was not saved. Napoleon demanded that he be first in the heart of any woman close to him and was ruthless when he detected divided loyalties. He upbraided his stepdaughter, Hortense, for mourning the death of her little boy excessively, and saw to it that Mme. Récamier's banker husband was ruined and she herself banished because she virtuously preferred her husband to him. Through all of this, Hibbert remains studiously nonjudgmental, allowing readers to form their own conclusions about the character of the great man. 16 pages color, 8 pages b&w illus. not seen by .