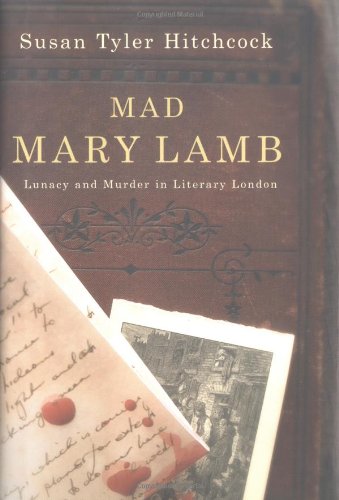 One afternoon in 1796, Mary Lamb, aged 31, killed her mother with a carving knife at the dinner table. Like Kathy Watson in her recent Hitchcock diagnoses manic-depression at the heart of Mary's matricidal act and her subsequent stays in Britain's early mental asylums. Hitchcock ( ), however, is far more willing to speculate about the gaps in the record of Mary's life, not to mention her thoughts and feelings as she regained something like a normal existence after the murder, which was judged an act of madness. Despite eventual bestselling collaborations with her brother, essayist Charles Lamb, in and , Mary left an erratic documentary trail, with only one significant personal essay, which Hitchcock sees as proto-feminist. Charles, her lifelong protector, remains the best source about his sister and their shared life. But his letters to such friends as Samuel Coleridge and Robert Southey show some reserve about the delicate subject of his sister's mental health. With such gaps, Hitchcock often resorts to reading into existing texts or inferring details of Mary's asylum experiences from typical practices of the time, which only partially resuscitates this tragic but elusive life. 32 illus. not seen by .