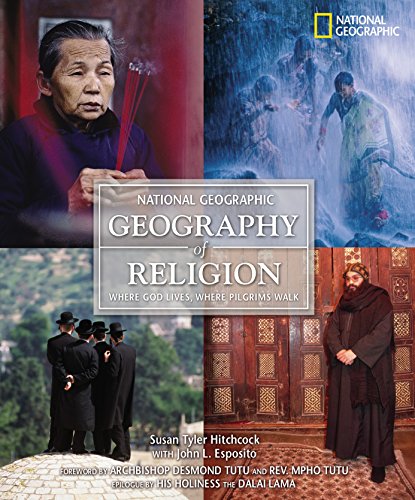 GEOGRAPHY OF RELIGION: Where God Lives, Where Pilgrims Walk

Though replete with the gorgeous photographs for which National Geographic is known, this book boasts no more than a literal handful of maps—five, to be exact—which seems odd for a book on geography. The authors of the foreword (Nobel laureate Archbishop Desmond Tutu and his daughter, Reverend Mpho Tutu) and of the epilogue (His Holiness the Dalai Lama) admirably echo each other in their beliefs that understanding begets tolerance, which in turn begets harmony. Disappointingly, the editors seem too unsure of their audience to foster a sustained understanding of Hinduism, Buddhism, Judaism, Christianity and Islam. Too text-heavy for the coffee table and too academic for the general reader, the dense narrative smothers the rich histories of these religions. Sidebars illustrating the particular practice of each faith provide some interesting insights, though at times these reveal more about their authors than the faith itself. A Hindu professor shares his memory of the assassination of Mahatma Gandhi and a Muslim-American professor laments her failure to impress upon her students the nuances of life as a woman in a Muslim country. Other sidebars—highlighting selected sacred scriptures and describing daily practice—easily compare faiths. The 200 photographs demonstrating the diversity of architecture, people and terrain, are stunning in their beauty and simplicity.