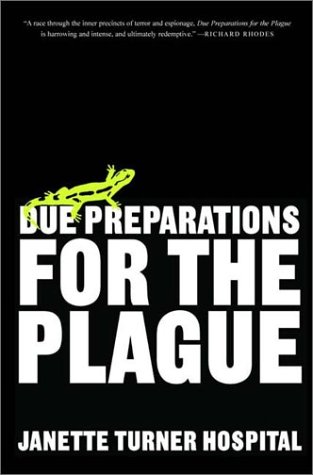 DUE PREPARATIONS FOR THE PLAGUE

Hospital () is a writer of many gifts; her dark imagination, astute insights into societal interactions and the supple beauty of her prose, provide an irresistible combination. This latest novel is an enthralling tale about the intertwined fates of the survivors and the relatives of those who perished on Flight 64, hijacked by terrorists in 1987. The dysfunctional life of Lowell Hawthorne, a divorced father of two children, is rooted in his mother's death on that flight when he was a teenager ("every year, as September approaches, he believes he has put it all behind him, he believes he has laid the ghosts, he believes he will feel nothing but a dull, almost pleasurable sort of pain, like a toothache. And then: shazam, he is a wreck again"). Hawthorne is also tormented by the fact that his estranged father, an intelligence agent, may have had some knowledge of the hijacking before it happened. When Hawthorne's father dies suddenly under suspicious circumstances and Hawthorne starts getting phone calls from Samantha, one of the 40 children who survived the fatal flight (they were released before the plane was blown up), Hawthorne is finally forced to confront his demons. Together, Hawthorne and Samantha go on a dangerous quest to discover the truth behind the disaster and to understand why there was an apparent government coverup in its aftermath. In intense, lyrical prose, Hospital introduces seemingly disparate characters and places and connects them through an elaborate and poignantly tragic plot, only disrupted by the distracting inclusion of overelaborate descriptions of terrorist tactics. In this age of global terrorism, Hospital's sophisticated psychological thriller offers a thought-provoking glimpse of the sociopolitical intricacies of the individuals and organizations that track terrorism, as well as of the enduring personal struggles of those left behind after an attack.