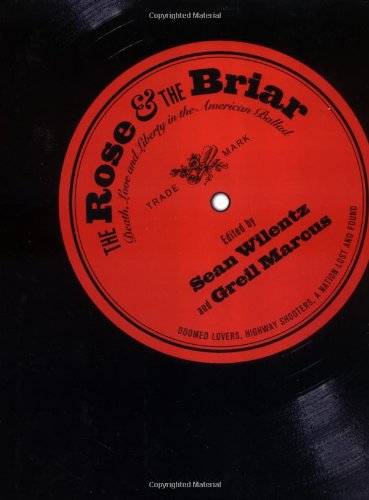 The Rose & The Briar: Death, Love and Liberty in the American Ballad

Arguing that the American ballad is "a major form—musically, perhaps, the major form—through which Americans told each other about themselves and the country they inhabited," Wilentz, a Princeton history professor, and Marcus ( ) offer this impressive, innovative tribute to it. The contributors—critics (Stanley Crouch), novelists (Joyce Carol Oates), poets (Paul Muldoon), songwriters (Anna Domino) and other writers, performers and artists—were asked to "help create some new works of art" about a ballad of their choosing. Sarah Vowell traces the evolution of the ballad "John Brown's Body" into the hit song of 1862, "The Battle Hymn of the Republic." John Rockwell meditates on the gentility of Burl Ives's "The Foggy, Foggy Dew" ("this performance helped define vocal beauty, shaping my taste forever"). R. Crumb contributes a hilarious cartoon version of "When You Go A Courtin' " that succinctly exposes the ballad's dark humor. And Eric Weisbard's wide-ranging "Love, Lore, Celebrity and Dead Babies: 'Down from Dover' by Dolly Parton" might be the best essay yet on the work done by this misunderstood country-pop diva. .