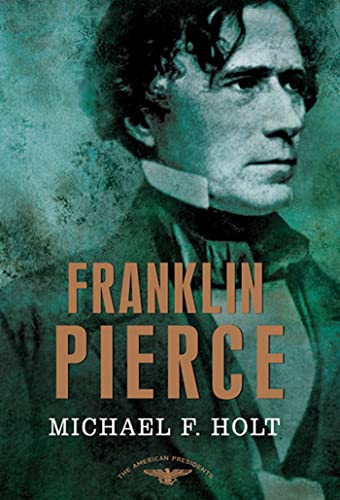 Like many historians, Holt considers Franklin Pierce’s administration (1853-1857) to be so inept that perhaps the greatest praise is that the succeeding administration, James Buchanan’s, was worse. Son of a prominent New Hampshire governor, Pierce (1804-1869) served in the Houseand Senate, resigning in 1842 but remaining leader of the Democrats in New Hampshire, where he remained extremely popular. This stood him in good stead when he was chosen in 1852 as a dark-horse presidential candidate by a deadlocked Democratic convention. He drubbed Winfield Scott in the presidential election to become the country’s 14th president. However, Pierce saw abolitionism as a threat to the Union, and his sympathy with Southern views helped lead the nation to civil war. Holt ( ) argues that Pierce’s support of 1854’s Kansas-Nebraska Act helped trigger the expansion of slavery into the territories. This bitterly divided the party in the North, which denied Pierce renomination in 1856. Holt writes well, delivering a lively, opinionated account of a president who served in turbulent times and did not improve matters. This is an admirable addition to the already admirable American Presidents series.