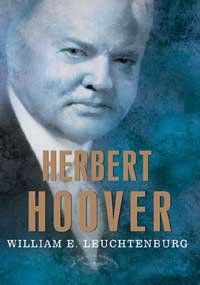 Herbert Hoover (1874–1964) would have satisfied anyone who believed a businessman would make an ideal president. In this outstanding addition to the American President series, Bancroft Prize–winning historian Leuchtenburg ( ) points out that while writers describe Hoover as a mining engineer, he was really a promoter and financier who traveled the world and made a fortune. He vaulted to fame after brilliantly organizing relief for the Belgian famine during WWI. Appointed secretary of commerce in 1920, he operated with a dictatorial manner that infuriated colleagues, but his dynamism and popularity made him a shoo-in for the Republican nomination in 1928. As president, his political ineptitude offended Congress and discouraged supporters even before the 1929 crash. Afterward, he backed imaginative programs to stimulate the economy but insisted that direct relief was socialistic and that local governments and charities were doing fine. In fact, they weren't, and this insistence combined with a dour personality made him a widely hated figure. A veteran historian of this period, Leuchtenburg brings vivid prose and strong opinions to this richly insightful biography of a president whose impressive business acumen served him poorly.