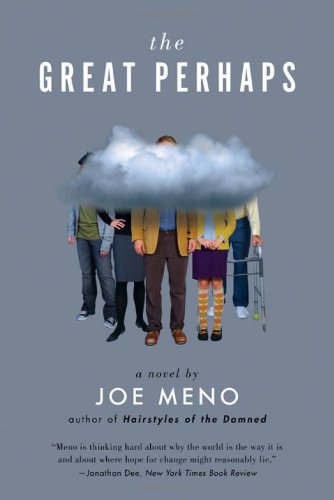 Meno ( ) continues to employ his keen observations of human nature, this time exploring the tumultuous landscapes of a contemporary Chicago family. The narrative rotates between members of the Casper family, giving each time and space to dig into their respective quirks. Jonathan, the father, is a scientist caught in a quest for a prehistoric squid and is prone to seizures at the sight of clouds. Madeline, Jonathan's wife, also a scientist, studies the behavior of her murderous lab pigeons and is distressed by the growing distance between family members: elder daughter Amelia is a teenage anticapitalist crusader already becoming weary of the fight; youngest daughter Thisbe's desire to find God is met with much concern from her atheist parents; grandfather Henry's sole desire is to make himself disappear. As the family's preoccupations rattle on and bang up against one another, the recently begun war in Iraq provides background noise and another dimension to the intricate and intimate tale. Meno's handle on the written word is fresh and inviting, conjuring a story that delves deeply into the human heart.