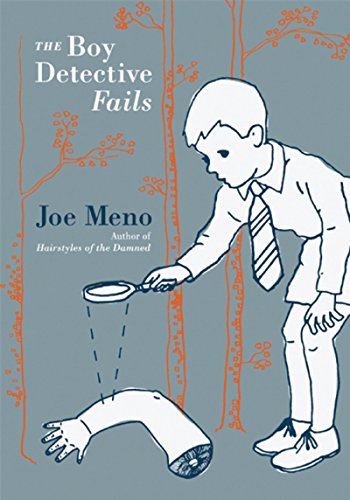 Playing such mysteries as "The Case of the Brown Bunny" against the mysteries of mortality and mankind's capacity for evil, the latest from Meno ( ) presents former child sleuth Billy Argo at 30, having just finished a 10-year stint in a mental hospital, where he was confined after his teenage sister Caroline's suicide. Unhappy, painfully shy and doped up on antianxiety drugs, Billy arrives in New York City and is admitted to a psych halfway house. Haunted by the mystery of his sister's death and feeling that a lapse in his sleuthing may be to blame, Billy is determined to find out the reason for her suicide and to punish those responsible. He soon finds allies in two bright and unpopular children who live across the street, and clues to relevant past cases from lifelong arch-enemy Professor Von Golum (who happens to live across the hall). Not all the plot strands pan out, and the effect is more impressionistic than narrative (various codes strewn throughout have their own digressive pleasures). But the story of Billy's search for truth, love and redemption is surprising and absorbing. Swaddled in melancholy and gentle humor, it builds in power as the clues pile up.