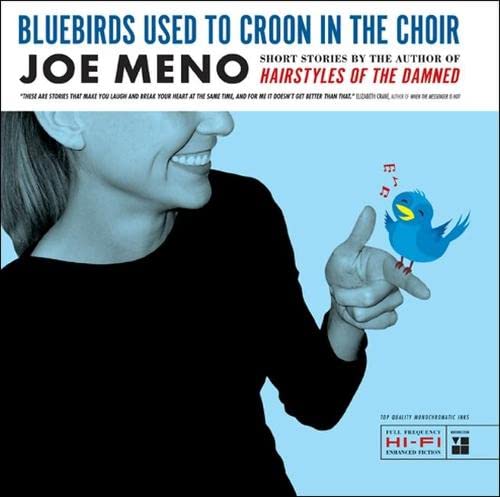 Bluebirds Used to Croon in the Choir

In Meno's offbeat universe, a horse predicts the future by crying into a bucket, and the Astronaut of the Year gets memorialized on ceramic garlic holders. The author (most recently of ) narrates his tales of awkward interpersonal relationships unfolding amid semisurreal situations in a cool, half-adolescent deadpan. First of the 17 stories is "The Use of Medicine," which has a great premise—kids putting costumes on anesthetized wild animals in the hopes of cheering up their mother, depressed after her husband's suicide—but falters in the telling, with too much import riding on the final ineffective line. Meno follows that up with a much better story about a dilapidated Greek Mythology Camp with "an Oracle-themed outhouse," one concerning a man who receives a "big settlement" from "a bad haircut" and another in which a lovesick livery driver obsesses over a "height-challenged" model who left him and went on to star in a TV series, . Though these stories don't always end as well as they begin, they're edgy and interesting, with a fine blend of the dark and the absurd.