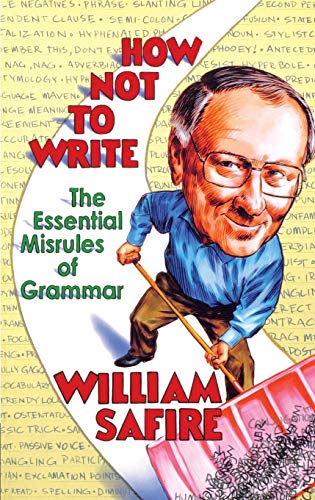 How Not to Write: The Essential Misrules of Grammar

There are only so many ways to denounce the double negative, and Safire hasn't discovered a new one. This slim style guide rehashes that not uncommon mistake along with 49 other equally obvious bloopers, which Safire boils down to short phrases that both illustrate and encapsulate the rule; e.g., "no sentence fragments" and "don't use contractions." Much of the text feels recycled from Safire's weekly "On Language" columns in the A section on onomatopoeia, for example, is little more than an excuse to recount the origins of "zap." Even with such meager content, the book is repetitious, attacking more than once "the pretentious use of dead words" and outdated slang, colloquialisms and dialect. Some passages, like an account of the debate over using "he" as a universal pronoun, are long past their sell-by date. That's probably the biggest problem with this would-be stylebook: the language mavens who are Safire's core audience will find it all overfamiliar, while graduating high school students, into whose hands the book will certainly fall, may regard the author's humor as terminally unhip. Strunk and White's no-nonsense remains the young writer's best bet.