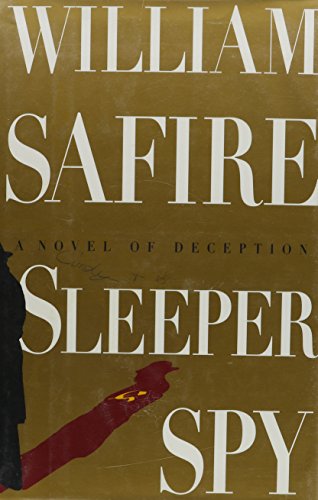 With nary a fistfight, chase or exchange of gunfire, the versatile Safire (Full Disclosure) fashions an engrossing post-Cold War thriller in which spies, bureaucrats and the media raise the trading of disinformation to an art form. Perpetually disheveled, middle-aged Irving Fein, the self-proclaimed ``best reporter in the world,'' wants to write a book on his latest, startling scoop: that a KGB ``sleeper spy,'' who for 20 years lived on standby status in the U.S., has disappeared--along with the colossal fortune that he, with the help of KGB intelligence and a mole in the U.S. Federal Reserve, has created from $2 billion in gold that Soviet hardliners gave him to invest on their behalf. Now the sleeper spy's handlers are dead, his identity is unknown and both the new Moscow government and the ousted KGB leaders, who have fallen in with a shady cadre of organized-crime figures, are out to track him down and claim the money. In order to attract a large book advance to fund Fein's digging, septuagenarian literary superagent Matt ``Ace'' McFarland teams the reporter with untested TV newscaster Viveca Farr. As the unlikely pair pursue their story, they will alternately tangle and cooperate with the CIA, the KGB, the Russian mafia and, ultimately, the sleeper himself. While Safire's characters tend toward the generic, and his romantic subplots lack sophistication, his clever dialogue and his masterful depiction of the bartering of information--true, half-true and patently false--are consistently fascinating. Like his characters, nearly all of whom practice some form of disinformation, Safire proves himself a master dissembler here, able to conjure plot twists that reveal nerve-racking truths previously hidden through his accomplished authorial sleight-of-hand. Major ad/promo; author tour. (Sept.)
close
Details