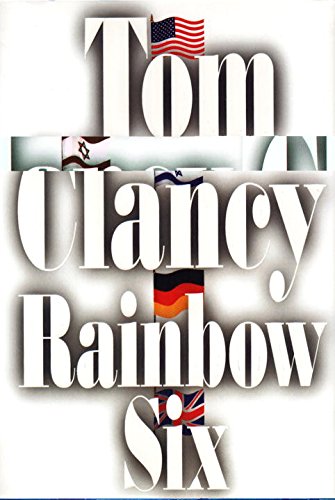 Two years ago, Executive Orders, which thrust Jack Ryan into the Oval Office, raised the bar for its immensely popular author. This first Clancy hardcover since then, though a ripping read, matches its predecessor neither in complexity nor intensity nor even, at 752 pages, length, despite a strong premise and some world-class action sequences. Instead of everyman Ryan, its lead is the more shadowed John Clark, the ex-Navy SEAL vigilante of Without Remorse who has appeared in several Ryan adventures. Clark now heads Rainbow Six, an international special-ops anti-terrorist strike force--and, despite the novelty of the conceit, that's a problem, as the profusion of protagonists, though sharply drawn (including, most notably, ""Ding"" Chavez, Clark's longtime protege), deprives the book of the sort of strong central character that has given Clancy's previous novels such heart. The story opens vigorously if arbitrarily, with an attempted airline hijacking foiled by Clark and Chavez, who happen to be on the plane. After that action sequence, the duo and others train at Rainbow Headquarters outside London, then leap into the fray against terrorists who have seized a bank in Bern, Switzerland. And so the pattern of the narrative is set: action sequence, interlude, action sequence, interlude, etc., giving it the structure and pace of a computer game. A major subplot involving bioterrorism that evolves into an overarching plotline syncopates that pattern, though Clancy's choice of environmentalists as his prime villains will strike some readers as odd. All of Clancy's fans, however, will revel in the writer's continued mastery at action writing; Rainbow's engagements, which occupy the bulk of the novel, are immensely suspenseful, breathtaking combos of expertly detailed combat and primal emotion. While not Clancy's best, then, his 10th hardcover will catapult to the top of bestseller lists--and for good reason. Two million first printing; $1 million ad/promo; simultaneous Random Audio and Red Storm Entertainment computer game; author tour. (Aug.)
close
Details