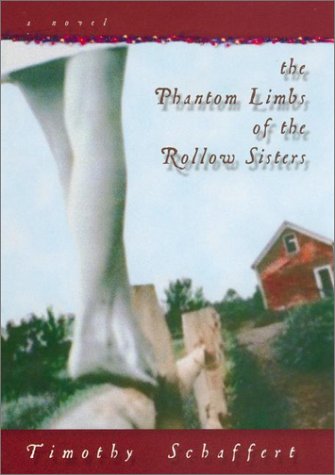 THE PHANTOM LIMBS OF THE ROLLOW SISTERS

Schaffert's heartfelt debut features two young misfit sisters left alone to run a junk shop in rural Nebraska. Mabel and Lily Rollow (21 and 18, respectively) have inherited the jumbled store from their grandmother, who left their small town a few months earlier. This latest act of neglect opens the childhood wounds of their father's suicide and their mother's abandonment, the phantom limbs through which they feel very real pain. The sisters draw strength from each other, but are as different as they can be physically and temperamentally; seductive Lily is kittenish and quixotic, while heavyset, bespectacled Mabel is the sensible one. The girls do agree on their mutual object of affection, 19-year-old Jordan, the cheap wine-swilling "cute ruin" who likens his preoccupation with suicide to "having a crush on a mean girl." But he falls for Lily and the lovebirds embark on a road trip to the Southwest to find the girls' mother, leaving Mabel alone to run the shop and exorcise her demons (a process that involves visiting a brain-damaged, former glue-sniffing addict rumored to communicate with the dead). Though the emotional terrain is familiar, and Schaffert occasionally overexplains his characters, the wistful coming-of-age story is solidly crafted and enlivened by quirky, Gothic touches and gentle humor.