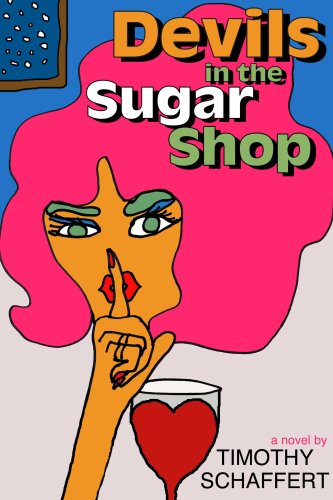 Devils in the Sugar Shop

The Old Market section of Omaha serves as the bohemian center of Schaffert's diverting third novel. Ashley Allyson teaches erotic writing workshops, but doesn't realize that her husband, Troy (who edits an alternative weekly, ), is cheating on her with her student, Peach. Peach is one the two 20-something identical twins who run the local bookstore, Mermaids Singing; the other, Plum, has a yen for Tucker, a tallish tattooed dwarf photographer who photographs his impressive genitals. Ashley's neighbor and friend Deedee Millwood operates a franchise of the titular "Sweet Shop," a sort of sex-based Tupperware party where she hawks racy goods and advises sexually forlorn suburbanites. Deedee's teenage daughter, Naomi, can't stand Deedee's confessions about her sex life, and has her own crush on gay teen Lee—son of Ashley and Troy. Another friend and neighbor, African-American visual artist Viv Dailey, has been the victim of an increasingly active art stalker. Over the course of one improbably packed February evening, a missent e-mail between Peach and Troy brings everyone together. Schaffert ( ) walks an uneasy tightrope between the amusingly sexy and the scabrous. The stalker's eventual characterization is a mean-spirited misstep, but Schaffert's bohemian Omaha is consistently surprising and vibrant.