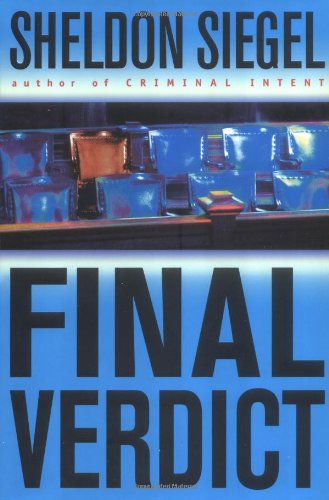 Siegel's fourth stand-out legal procedural features likable law partners Mike Daley and ex-wife Rosie Fernandez working together in their San Francisco firm, Fernandez, Daley and O'Malley. As with the others in the series (; ; ), it's a low-key but pleasantly compelling read. Skid row resident Leon Walker, successfully represented by Michael and Rosie in a murder case 10 years earlier, reappears and seeks legal help once again. Leon is charged with the murder of Tower Grayson, a Silicon Valley venture capitalist found stabbed to death in a Dumpster behind a liquor store. The firm has several good reasons to turn Walker down. After Rosie's battle with breast cancer, they've sworn off exhaustive murder investigations, and the original Leon Walker case destroyed their marriage. But Michael's unbending moral code compels him to take the job, and Rosie reluctantly goes along. It's a tough case as both the cops and the prosecutors are doing everything in their power, including intimidating witnesses and threatening Michael, to take the accused man down. Leon, who lives in a flophouse and is dying of liver disease, is equally determined to go to his grave an innocent man. Although Grayson's family and business partners depict him as a pillar of the community, dogged detective work (Michael's ex-cop brother is a PI) turns up a wealth of unsavory evidence attesting to Grayson's many failings, both legal and moral. Michael's careful deliberations and ethical considerations are a refreshing contrast to the slapdash morality and breakneck speed of most legal thrillers. The lengthy, detailed courtroom scenes are instructive and authentic, the resolution fair, dramatic and satisfying. Michael, Rosie, daughter Grace and friends are characters worth rooting for. The verdict is clear; another win for Siegel.