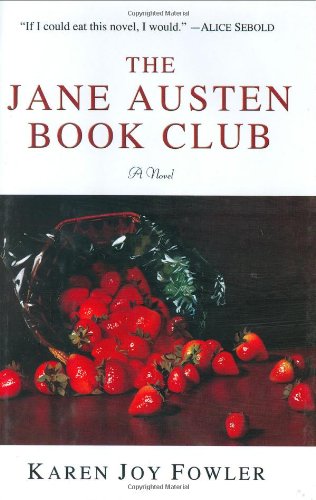 Fowler's fifth novel (after PEN/Faulkner award finalist ) features her trademark sly wit, quirky characters and digressive storytelling, but with a difference: this one is book club–ready, complete with mock-serious "questions for discussion" posed by the characters themselves. The plot here is deceptively slim: five women and one enigmatic man meet on a monthly basis to discuss the novels of Jane Austen, one at a time. As they debate Marianne's marriage to Brandon and whether or not Charlotte Lucas is gay, they reveal nothing so much as their own "private Austen(s)": to Jocelyn, an unmarried "control freak," the author is the consummate matchmaker; to solitary Prudie, she's the supreme ironist; to the lesbian Allegra, she's the disingenuous defender of the social caste system, etc. The book club's conversation is variously astute, petty, obvious and funny, but no one stays with it: the characters nibble high-calorie desserts, sip margaritas and drift off into personal reveries. Like Austen, Fowler is a subversive wit and a wise observer of human interaction of all stripes ("All parents wanted an impossible life for their children—happy beginning, happy middle, happy ending. No plot of any kind"). She's also an enthusiastic consumer of popular culture, offsetting the heady literary chat with references to , Linux and "a rug that many of us recognized from the Sundance catalog." Though the 21 pages of quotations from Austen's family, friends and critics seems excessive, the novelty of Fowler's package should attract significant numbers of book club members, not to mention the legions of Janeites craving good company and happy endings.