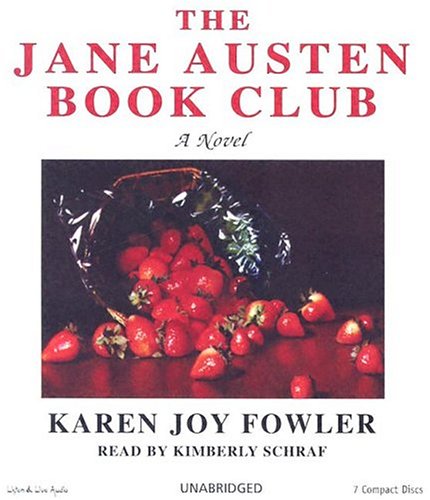 With its many section breaks and point-of-view shifts, Fowler's newest book (following ) poses significant challenges for a single narrator. But stage actress Schraf overcomes these obstacles with ease, her voice taking on just a touch of haughtiness for the chapters told from the "we" perspective and then switching back to an unassuming tone for the third-person sections. It may take listeners a short while to grasp the story's structure, but once they do, they'll be hopelessly snared by this witty look at the lives and loves of six people, all members of Central Valley, California's "all-Jane-Austen-all-the-time book club." As the members discuss Austen's stance on marriage, social status and love, the narrative meanders, touching on defining moments in the characters' lives and then drifting back to describe their current dilemmas: single, middle-aged Jocelyn has never been in love; French teacher Prudie can't stop thinking about men other than her husband; chatty Bernadette has decided to "let herself go"; warm-hearted Sylvia still loves her soon-to-be-ex-husband; emotional Allegra has left her girlfriend; and sci-fi aficionado Grigg is infatuated with someone who may not share his affection. Through subtle alterations of tone and inflection, Schraf neatly conveys the emotions and idiosyncrasies of each character, from Prudie's impossibly pretentious French asides to Bernadette's airy, endless storytelling. Playful and intelligent, this audiobook embodies the best of both the written and aural worlds.