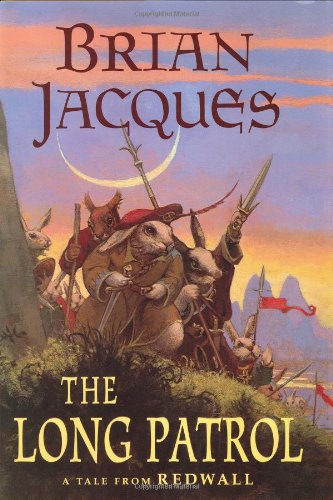 Jacques sticks to the tried-and-true in the latest installment of the Redwall series. In the declining years of the characters previously featured in Pearls of Lutra, a menacing band of raiders again threatens Redwall Abbey. And once again the good animals of Redwall and Mossflower must join together to fight the invader. A new protagonist, the young hare Tammo, joins the Long Patrol, an outfit charged with the protection of all the animals in Mossflower Wood and fabled for its soldiering; he does well in battle but wants no more of it: ""No, I'm not all right, sah. I've seen death!"" Love, sparked by an attractive female hare, is more important to him. Meanwhile, at the Abbey, excavations lead to a treasure hunt, like the one found in Lutra though not as integral to the plot. These familiar story lines are seasoned with a few other new characters and groups of animals, notably a wandering female squirrel (who, unfortunately, survives only halfway through). The Painted Ones and the Waterhogs, based on what appear to be popular perceptions of African tribesmen and Native American warriors, also make guest appearances. And of course, there is the familiar roster of animal types--royal badgers, officer-class hares, greedy but cowardly rats and the country bumpkin moles, who can always be relied upon for a funny ""gem of mole logic."" The formula, in other words, still works, and the narrative, as usual, is tightly plotted and--except for the difficult-to-decipher dialects and lengthy descriptions of food--briskly paced. A feast for the faithful. Ages 12-up. (Feb.)
close
Details