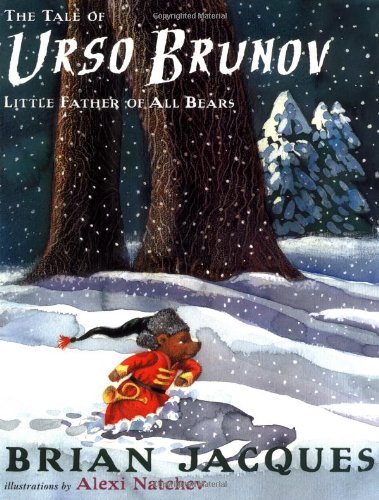 THE TALE OF URSO BRUNOV: Little Father of All Bears

Despite the lengthiness of his text, Jacques delivers just the swashbuckling adventure that fans of his Redwall novels might expect. His mighty, thumb-size bear hero, Urso Brunov, crosses mountains and deserts, defeats a despot and rescues the similarly diminutive compatriots he has traveled miles to find. Dressed like a Cossack, Urso sets out to bring back four errant bears from his tribe. "I will find them," he declares, and adds, with appealing braggadocio, "Believe me, for I am Urso Brunov!" From conversations with animals, the moon and the wind, Urso Brunov learns that his bears may have been taken by men, to the Lord of All Sands in "the place of the Lightning Flash and Two Cartwheels"—a legend that turns out to describe the three letters "Z-O-O." There the fez-wearing, pot-bellied Lord of All Sands holds the captured animals at his pleasure, but Urso confronts the evildoer in his dining hall, ties "special moustache knots" that restrain the villain, and an especially triumphant wordless spread shows the liberated animals. Deft characterization and many humorous asides add to the celebratory mood. In dynamic single- and double-page spreads, Natchev's ( ) watercolors revel in playing with scale as well as texture. Almost tactile renderings of snow-covered trees, brittle leaves, wrinkled pachyderm skin and shining brass enhance the story's immediacy. Ages 4-8.