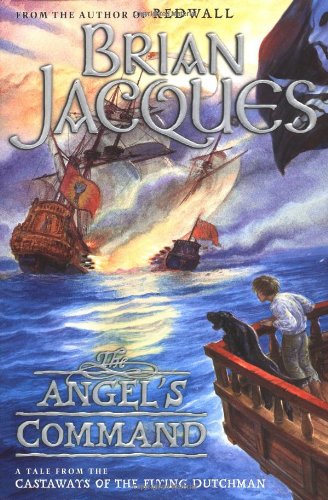 In this sequel to , young Ben and his faithful black Labrador, Ned, having escaped the ghostly ship's hellish curse but bound to wander the world for eternity lending a helping hand wherever needed, return for another spate of adventures. Once again, Jacques spins a rousing yarn that fairly bursts at the seams with exciting escapades, exotic locations, poems, shanties, treachery and derring-do as the heroes travel from the pirate-infested Caribbean to a cave awash with evil magic high in the Pyrénées. If Jacques piles it on a bit thick in what actually becomes two separate tales—one a sea voyage and the other an overland trek—the sheer storytelling vigor is hard to resist. The second half of the book proves especially enticing, when Ben and his dog, who communicate telepathically and whose affectionate sparring provides much of the book's spark, team up with a feisty gypsy girl and a young artist to save the long-lost son of a nobleman. As in all of Jacques's books, he conjures a colorful, fully realized world (particularly the gastronomic delights) and injects the pages with plenty of snappy repartee ("Cease cackling like a market goose, you old relic," the nobleman calls affectionately to his cook). Readers can once again take satisfaction in the fact that virtue is rewarded, evil-doers get their comeuppance and good triumphs over evil in Jacques's universe. All ages.