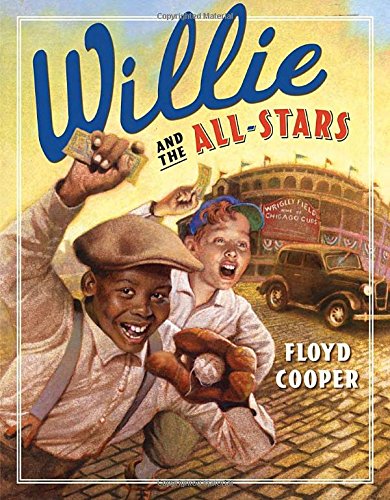 Willie and the All-Stars

In 1942 Chicago, young Willie dreams of being a baseball player, just like the Major League Baseball stars that play in nearby Wrigley Field. But baseball is still segregated and Willie, as a neighbor points out, “is the wrong color.” Willie's hopes are rekindled at an exhibition game between the Negro League All-Star team and the Major League All-Stars, when he witnesses Satchel Paige's team win the grudging respect of their white opponents. Cooper's text often lands with the heavy thunk of an after-school special, and Willie's friendship with an Irish boy seems more well-meaning than authentic, given the historical realities of the book's setting. There's far more grace in the sepia-toned oil-wash paintings, which combine photorealistic portraiture with dramatic composition. Whether he's working in closeup or conveying a ballpark buzzing with fans, Cooper ( ) swings for the fences, and he almost always delivers. Ages 6–8.