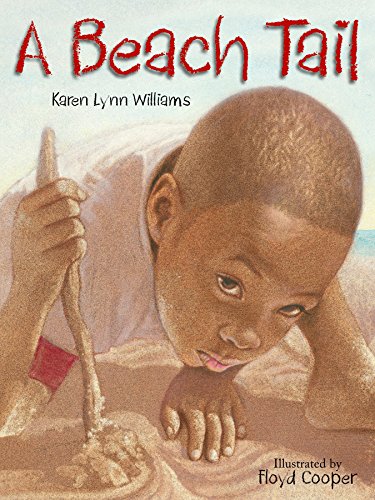 At the beach with his father, Greg strays from his beach umbrella, but stays calm and remembers the two things Dad told him: “Don’t go in the water, and don’t leave Sandy.” Sandy is a lion Greg has drawn in the sand, and because Greg hasn’t lifted the stick with which he has drawn Sandy’s long, long tail (circling, as he goes, a jellyfish, a horseshoe crab, and other beachside marvels), he’s able to retrace his steps to find his father, who’s delighted to see him. Cooper ( ) draws a startlingly real Greg in a series of tight closeups; readers will feel they can reach out and touch him. Grainy pastel and washed-out color evoke the seashore’s bleached palette, while Greg’s reverent attention to the treasures he finds is the focus of every page. The representation of an African-American father and child in a nonurban setting is welcome, while Williams’s ( ) even pacing and soothing text reassure children without losing momentum. Most valuable, though, is Williams’s belief in Greg and his resourcefulness; quiet satisfaction pervades his story. Ages 3–7.