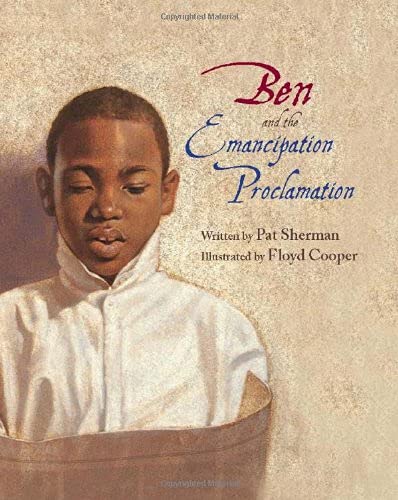 Ben and the Emancipation Proclamation

Driven by Cooper's ( ) textural, earth-toned oil paintings, this uplifting story spotlights the early life of Benjamin C. Holmes, born a slave in the 1840s. As a tailor's apprentice in Charleston, S.C., the boy discovers “all kinds of secret ways to learn how to read,” deciphering words on street signs and in newspapers. In a memorable scene, Ben, on a rare visit home, reads the Bible to his illiterate mother, and she promises him a gold dollar when he learns to write. Sherman's ( ) storytelling doesn't eschew the darker aspects of Ben's story: his father was sold off after teaching Ben the alphabet; he never sees his mother again after receiving the gold coin; and he's sent to a slave prison when the tailor flees as the Union Army approaches. Rumors that Lincoln has freed all slaves are confirmed when Ben reads a newspaper article announcing the Emancipation Proclamation to fellow slaves in the prison. Though Sherman's narrative ends there, a concluding note touches on Holmes's later life as a singer and teacher. Ages 8–12.