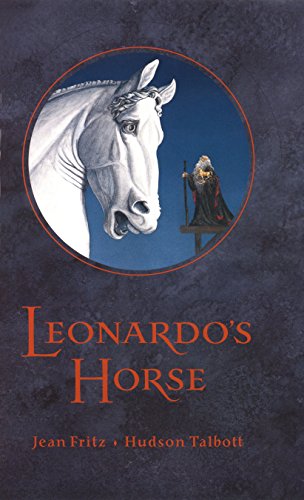 Fritz () again calls upon her informal yet informative style to spotlight a scintillating sliver of history, recounted in two related tales. Her narrative opens as the ultimate Renaissance man, Leonardo da Vinci, earns a commission from the duke of Milan to create a sculpture to honor the duke's father—a bronze horse three times larger than life. Though this creative genius spent years on the project, he died without realizing his dream and, writes Fritz, "It was said that even on his deathbed, Leonardo wept for his horse." The author then fast-forwards to 1977: an American named Charles Dent vows to create the sculpture and make it a gift from the American people to the residents of Italy. How his goal was accomplished (alas, posthumously) makes for an intriguing tale that Fritz deftly relays. Talbott's () diverse multimedia artwork includes reproductions of da Vinci's notebooks, panoramas revealing the Renaissance in lavish detail and majestic renderings of the final equine sculpture. Talbott makes creative use of the book's format—a rectangle topped by a semi-circle: the rounded space by turns becomes a window through which da Vinci views a cloud shaped like a flying horse; the domed building that was Dent's studio and gallery; and a globe depicting the route the bronze horse travels on its way from the U.S. to Italy. An inventive introduction to the Renaissance and one of its masters. Ages 5-up.