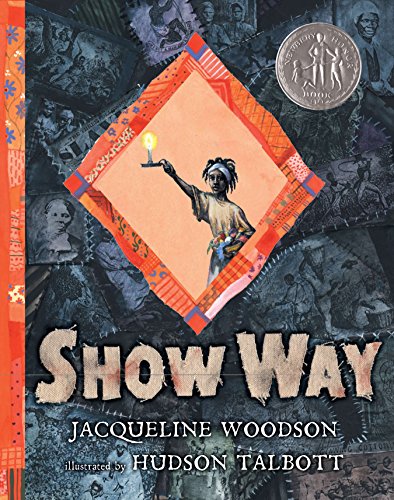 This affecting, poetic paper-over-board picture book stands out from the first glance. On the innovative cover, a montage of black-and-white pictures of African-American captives, arranged to resemble a quilt, act as a background to a diamond-shaped die-cut opening that frames the image of an African-American girl holding a lighted candle. Woodson's ( ) story, both historical and deeply personal, begins as a seven-year-old girl is sold into slavery and taken to a South Carolina plantation "without her ma or pa but with some muslin her ma had given her." There she learns to "sew colored thread into stars and moons and roads that slave children grew up and followed late in the night, a piece of quilt and the true moon leading them." Later, her daughter also stitches quilts that become "a Show Way" to guide captives escaping to freedom. The quilt becomes a metaphor not only for physical freedom but for freedom of expression. Long after emancipation, subsequent generations of women in this family stay connected through quilting, using needle and thread as a means of support and as a creative outlet. Woodson eventually reveals that this is her own lineage, and "[her] words became books that told the stories of many people's Show Ways." Talbott uses the quilt motif in rousing ways, piecing together quotes or news items for a pair of spreads about one generation "walking in a line to change the laws" as well as in softly quilted patterns that tie together the love of a child, a theme throughout this elegantly designed volume. Ages 5-up.