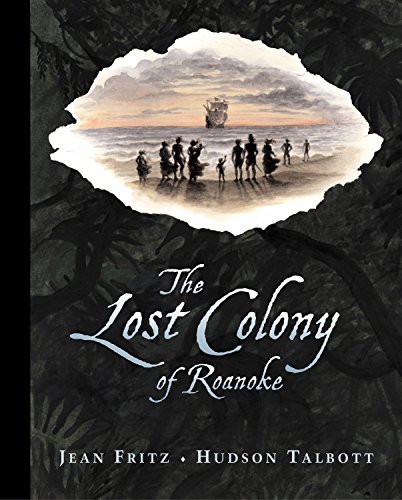 THE LOST COLONY OF ROANOKE

Previously teamed for Fritz and Talbott now focus on the complicated, still-elusive story of English exploration off the Virginia coast in the 1580s. Studded with facts, anecdotes and historical asides, Fritz's rapid-fire account sets the scene at Queen Elizabeth's court, where Walter Raleigh's friend uses his "show stone" to look into the future and predict that the English would find, hidden behind a long cape, an island where they could settle ("later to be called Roanoke"). The action moves quickly from the successful preliminary exploratory voyage to the disastrous initial expedition of 500 men sent to form a colony; if readers skip even one sentence, they will be lost. Most of the time, fortunately, the writing will compel attention, especially when Fritz focuses on the English policy toward supposedly hostile Indians—"smite them hip and thigh"—and its possible consequences for the second colony, where Virginia Dare was famously born and, along with 114 others, disappeared into oblivion. A concluding section helps the audience assess theories about the fate of the settlers and grapple with a more searching question: "This is not only a mystery; it is a tragic story. And who is to blame for the tragedy?" Talbott's detailed watercolors feature miniature portraits of the principals as well as dramatic, sprawling scenarios. While the dense presentation is not ideally suited to the short format, middle-school readers who are up to a challenge will come away with both a deeper appreciation of a historical mystery and a fuller awareness of how historians sift it for clues and interpretations. Ages 7-up.