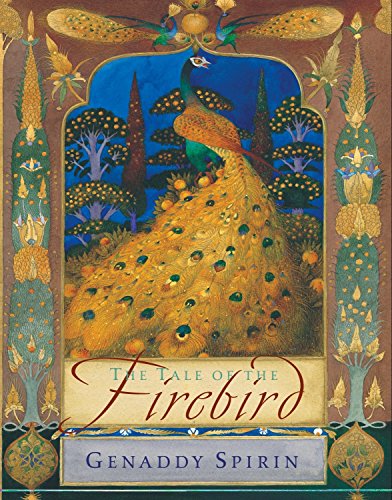 THE TALE OF THE FIREBIRD

As elegant as any imperial treasure, this sumptuously illustrated book showcases Spirin's (; ) near-magical artistry. Here he adapts three Russian fairy tales to coin his own version of the story of the tsar's son and his quest for the dazzling firebird. This prince receives aid from a big gray wolf, who helps him through a number of trials, even though the prince doesn't always follow his instructions. Their adventures take them to far-off kingdoms, to Baba Yaga's chicken-footed cottage and to the battlefield of Koshchei the Immortal. Ultimately, Ivan-Tsarevitch not only finds the firebird but also rescues and wins the hand of princess Yelena the Beautiful. The cadences are stately ("In a moment, the wolf had transformed himself into a warrior's horse so great and strong that it cannot be described, either with words or with a brush"), and the artwork is some of Spirin's most exquisite. Some of his watercolors are shaped like triptychs or altarpieces, others stretch across both pages like tapestries. The central compositions twinkle and glow as if dusted with gold leaf; twining about the text, the borders are intricately detailed but wrought in an airier, more open style that recalls the folk origins of the story. Ages 4-8.