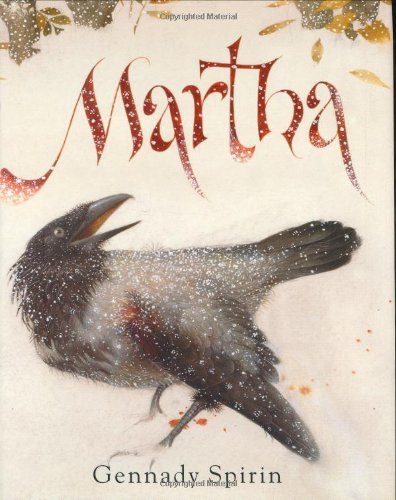 Spirin ( ) fans will welcome his latest book, which reveals something of his own life. One winter evening, Spirin's wife and five-year-old son, Ilya, return to their Moscow apartment with an injured crow. An earth-toned watercolor shows the family in the veterinarian's waiting room along with a motley assortment of bundled-up Muscovites and their animals. "The bird will never fly again," says the veterinarian, a grinning man holding a big needle. "Put it to sleep." "Mama, Papa. I am not going to let him!" says Ilya. "This is my crow!" In the early pages, Spirin's portraits appear silhouetted against snow-white pages. Once Martha the crow joins the family, joyful still life pictures depict Ilya's toys scattered on the floor, the artist's own sketches pinned to the wall, and views of the wintry street. Martha convalesces in Spirin's studio, and when she learns to fly again—and takes to landing on the artist's head—the whole family celebrates. In the spring, she learns to perch on the window ledge, then finally flies away. Every detail of Spirin's album reflects his devotion to the small world around him: his son in his favorite soccer jersey, posing with Martha on his head; his wife cradling the bird in her arms; and Martha herself, using her beak to tear off her bandages with a balletic flourish. In setting his memories down, and then again in publishing them, Spirin has performed a double act of love. Ages 4-up.