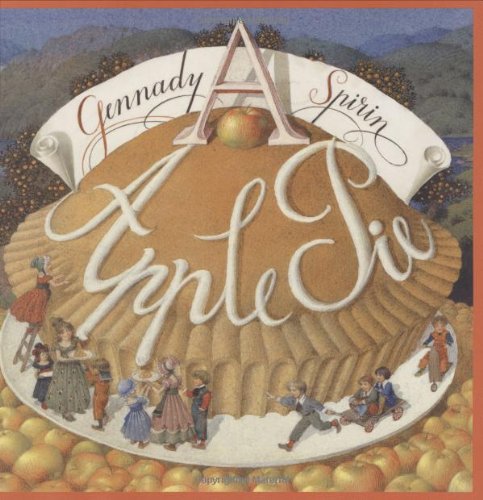 A 17th-century English alphabet rhyme inspires Spirin's illustrations, which take on a distinctly Victorian tone. Set inside or outside English country houses, the full-bleed paintings and silhouette images teem with rosy-cheeked girls in long flowing dresses, bonnets and sashes, and boys clad in knickers. The top of the page contains each letter printed in capital and lowercase, followed by the same letters and a two- or three-word phrase written in elegant, old-fashioned script: "A, a. Apple Pie/ B, b. Bit it./ C, c. Cut it." Underneath the text, an ivory-colored capital letter serves as each illustration's centerpiece. For example, an forms an arch, under which a crew of beefeaters plus bakers sporting white hats and aprons carry in an enormous golden pie, while women and children (some riding dappled rocking horses) applaud the parade. For "Q, q. Quartered it," the 's oval acts as a peephole into a room where children cluster around an old woman (who could be Mother Goose) cutting a pie. An apple nestles in the bottom corner of each page, with a rotating cast of creatures whose names begin with that page's letter (e.g., has a grasshopper, , a horse). Throughout, the recurring characters' postures and facial expressions convey a longing and reverence for apple pie. Spirin's style is especially well suited to this time-proven rhyme. All ages.