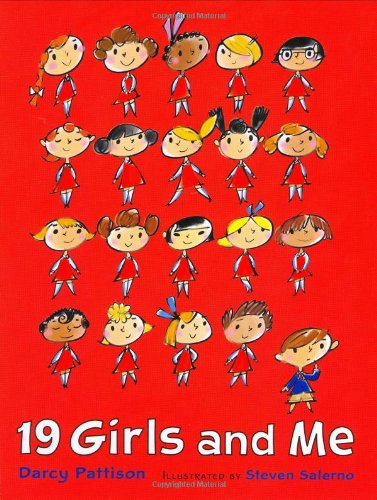 Gender weighs on the mind of John Hercules Po, the only boy in his kindergarten class. Every day, John's second-grader brother warns that playing with girls turns a guy "into a sissy," and John anxiously asserts he'll turn the girls "into tomboys" first. At recess, John eagerly proposes what he considers boyish fun ("Let's build a skyscraper!"). To his surprise, his classmates add to his original ideas—although the 19 girls follow John's initiative every time. After a feigned battle with a yeti atop icy-blue Everest slopes, John reports that the girls "throw snowballs hard." When they pretend a wooden wagon is a race car and christen it the , John protests the "sissy name," but takes the driver's seat, with his companions in a toboggan row behind him. Salerno ( ) styles his graceful and energetic pictures after Bemelmans's , and gives the pert girls a variety of curls, braids and skin tones; John's blue school blazer and tie stand out from his classmates' uniform red jumpers. Pattison ( ) challenges the terms "sissy" and "tomboy"; when John's brother judges the girls "nineteen tomboys," John corrects him by saying "nineteen friends." Ultimately, though, the "one lone boy"—no sissy he—exhibits the strongest personality and the greatest influence. and do a better job of undermining girl/boy stereotypes. Ages 4-up.