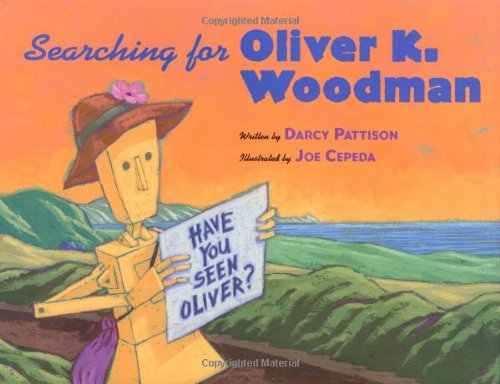 Pattison and Cepeda bring back the wooden traveler from their , which recounted his trip from east coast to west to visit a girl named Tameka. This time, however, Oliver's experiences take a back seat to those of another life-size wooden figure, Ms. Imogene Poplar, P.I. Sent out with a note ("I am a private investigator searching for Oliver K. Woodman.... Please help me find him") the heroine's highway adventures—and near misses—in her search for Oliver are similarly recounted in the letters and postcards from the people she encounters (a Broadway singer, a Chicago jazz sideman, a Seattle weatherman, etc.). Cepeda's trademark palette dominates the spreads (many of them wordless) in paintings that highlight the sights of the various cities and towns. In the narrative, Imogene seemingly repays the favors of those who give her a lift. For instance, she's shown stiffly guarding the rodeo clown who drove her to Seattle, while the letter reads, "Ms. P.I.... doesn't flinch at all when the bulls charge." Small details, such as clever license plates (the clown's plate reads "EEEHA"), add to the book's subtle humor. A sidebar story about a budding romance between Imogene and Oliver's creator (Tameka's Uncle Ray) and a reporter, adds another twist to this whimsical cross-country jaunt. Young readers will eagerly await more exciting travels from the wooden duo, who finally meet up under the northern lights in Alaska. Ages 5-8.