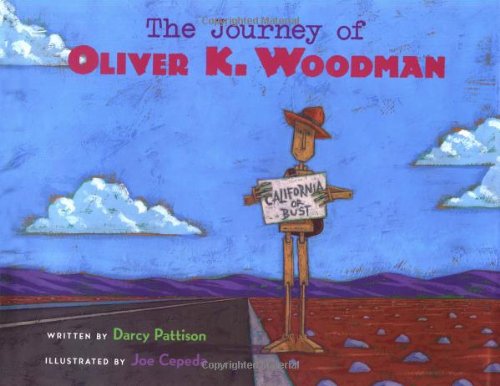 THE JOURNEY OF OLIVER K. WOODMAN

Part geography lesson, part cross-country travelogue, this tale begins when young Tameka writes to her Uncle Ray in Rock Hill, S.C., and invites him to visit her in Redcrest, Calif. The innovative carpenter—unable to make the trip—builds and sends in his place an enigmatic emissary. Oliver K. Woodman, a wooden figure akin to a large marionette without strings, sports a bright orange felt hat and a backpack that carries a note asking travelers to "give me a ride" and "drop a note to my friend, Raymond Johnson." Oliver makes the coast-to-coast trek "hitching rides" from truckers and three elderly sisters, joining Miss Utah in a parade and even scaring away bears in the Redwood forest. The entire tale unfolds through correspondence written in various typefaces, and occasional wordless spreads, painted in Cepeda's () unmistakable palette, which demonstrate the breathtaking beauty of America's varied vistas. In one, the artist depicts an insignificant-looking Oliver standing alongside a New Mexico highway with mesas and a pink sky filled with thunder clouds that seem to drift off the pages. Pattison () nicely varies the voices and pacing throughout (e.g., "So when Quinn's cousin's boyfriend's aunt was leaving to visit her sick grandfather in Fort Smith, Ark., the guys loaded Mr. OK into the aunt's station wagon," an Arkansan writes), and the story's emphasis on geography (the final endpapers trace Oliver's trip) injects added interest into this warm tale that ends in a family reunion after all. Ages 5-8.