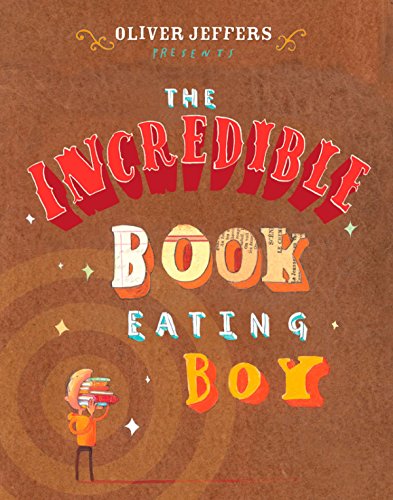 This story, inventively painted in mixed media on discarded bindings, book covers and tattered, yellowed pages of paper, may earn Jeffers (Lost and Found) a reputation as an incredible book-recycling artist. Jeffers introduces a boy named Henry who gobbles books, though “red ones were his favorite.” The information contained in each devoured tome directly enters Henry’s brain, so “the more he ate, the smarter he got” (not unlike Susan Meddaugh’s alphabet-soup-eating dog, Martha). Henry finds all content tasty—“he wasn’t fussy” —and his knowledge exponentially increases until his excessive appetite starts giving him indigestion. After he gets sick, Henry tries reading books for a change: “Henry discovered that he loved to read. And he thought that if he read enough he might still become the smartest person on Earth. It would just take a bit longer.” Jeffers has created a book about books from books, in a collage style less abstract than Sara Fanelli’s. A whimsical die-cut in the shape of a toothy bite, taken from the lower rear corner of the final pages, further asserts the point that some habits die hard. Jeffers adeptly uses hyperbole throughout the tale so that the underlying message never feels preachy or didactic. Additionally, his beautiful handling of found materials ought to wow young artists who take a close look—though not so close as to leave tooth marks of their own. Ages 4-up. (Apr.)