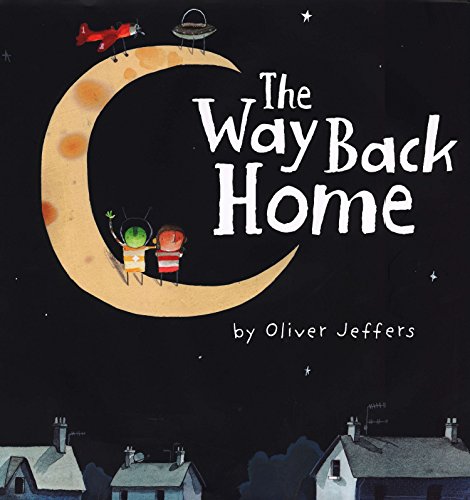 The Way Back Home

Jeffers's ( ) arrestingly illustrated book begins with the creation of a spare watercolor worldâ€”a single, nameless boy on a deserted beach. Quickly the story takes a surprising turn: the boy finds an airplane in his closet and crashes it on the moon. When he's joined by a similarly stranded Martian, the two strangers hatch a scrappy plan for rescue, suggesting a moral: it's good to work together. After the unusual narrative leaps at the beginning of the story, the message feels a little forced, and it's less fun than expected. Even so, a quality reminiscent of comes through, not just in the lone boy/outer-space setting, but in the balance between the humor in the predicament and loneliness. These two emotions are matched perfectly by the mixed-media art. Colorful figures swim in vast amounts of negative space, isolated and a bit melancholy, but their postures and faces are playful, almost comic. An odd scale and lopsided figures suggest a world off-kilter, while silly monsters and impossible feats keep things light. With uneven graphite outlines on watercolor-soaked paper that reveals the grain of the paper, the overall effect is tactile, textured and even a little childlike. Ages 4-up.