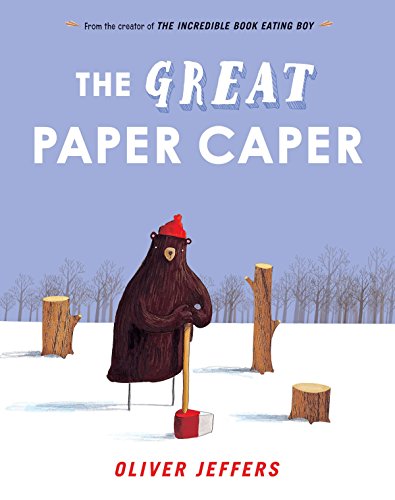 Jeffers’s ( ) forest creatures have dots for eyes and sticks for legs; they live in tidy holes in the ground, equipped with home offices and washing machines. Responsible citizens, they notice that trees in their forest are missing big branches, and organize themselves to find the perpetrator—readers know from the outset it’s the bear, in need of paper for a paper airplane contest. The drama unfolds in neatly paced vignettes and comic book–style panels with the rounded corners of old television sets. Jeffers joins the speech balloons to his characters’ mouths with ruled pencil lines; his spidery writing is a sweetly incongruous vehicle for fast-moving patter (“I’ll be the detective and you can be the judge,” the beaver tells the deer. “Why do I have to be the judge?’” the deer protests, and waves a hoof toward the pig. “Why not him?” “I’m the prosecutor, that’s why,” says the pig). The conclusion nods toward forgiveness and restorative justice, but it’s the anti-crime tape that gets the laughs. Jeffers lobs a joke or two over the heads of young listeners, a gesture that will be welcomed by presiding adults. Ages 3–5.